What is Dave Lawrence?

I am a bit difficult to describe. I am a journalist, author of two books (Upheaval from the Abyss: Ocean Floor Mapping and the Earth Science Revolution, published by Rutgers University Press in 2002; and Huntington's Disease, published by Chelsea House in 2009), scientist and professional scuba diver. My education is diverse, ranging from biology, ecology, and geography to journalism. I have taught biology, geography, meteorology, and oceanography at several colleges in the Richmond, Va., area; now I am a Ph.D. Candidate in Media, Art, and Text—and occasionally teach journalism—at Virginia Commonwealth University.

I am also sports editor for two newspapers in the Richmond Suburban Newspapers group—The Mechanicsville Local and The King William Local.

My journalistic specialties are a rather odd combination of science and sports writing. In addition to my book, my writing has appeared in two anthologies The Science of Dune: An Unauthorized Exploration into the Real Science Behind Frank Herbert’s Fictional Universe and The Science of Michael Crichton: An Unauthorized Exploration into the Real Science behind the Fictional Worlds of Michael Crichton (both published by BenBella Books in 2008), and the magazines Geotimes (now Earth), The Lancet, The Lancet Infectious Diseases, Mercator's World (sadly, no longer with us), and Vegetarian Times.

Having grown up in and with the newspaper business, I have spent much of the past three decades working for newspapers such as The (Charlottesville, Va.) Daily Progress, The (Newport News, Va.) Daily Press, the Miami Herald, the (Parsippany, N.J.) Daily Record, the (Petersburg, Va.) Progress-Index, the Philadelphia Inquirer, the Richmond (Va.) Times-Dispatch, The (Shreveport, La.) Times, The Tallahassee (Fla.) Democrat, and the (Norfolk, Va.) Virginian-Pilot. Most of that has been sports, but I have done my share of work on the news and online side.

Some of my more challenging writing work has been for the radio programs Our Ocean World and MicrobeWorld.

In 2010, I accepted the most challenging writing assignment of my life—working as science writer/editor/photographer for the Sea Education Association's Plastics at SEA: North Atlantic Expedition 2010. We spent more than 30 days at sea, sailed more than 3,000 nautical miles: east from Bermuda, across the Mid-Atlantic Ridge, and back. During the expedition, I wrote and published more than 33,000 words and took more than 5,000 photos.

As a scientist, my interests began primarily in biogeography and forest ecology, with an emphasis on using tree-ring analysis to tackle questions regarding the distribution and environmental history of tree species. I have since added freshwater and marine ecology to my interests. Over the years I have worked as a consultant to the Environmental Protection Agency and the USDA Forest Service, as a staff member of Virginia Department of Environmental Quality; and most recently, as an ecological consultant at Lake Rawlings Scuba Park in Brunswick County, Va.. My academic writing has appeared in the Bulletin of the Ecological Society of America, the Canadian Journal of Forest Research, Tree-Ring Research, and the Virginia Journal of Science.

Personally, I'm more than a bit of a flake. My private interests are as diverse as my professional ones, including music (pretty much anything but elevator music), writing (of course, just don't ask me how far I've come with my screenplays or novel), photography, fishing (I've finally learned to fly fish), hiking, genealogy, and more other things than any sensible person could cram into one lifetime. 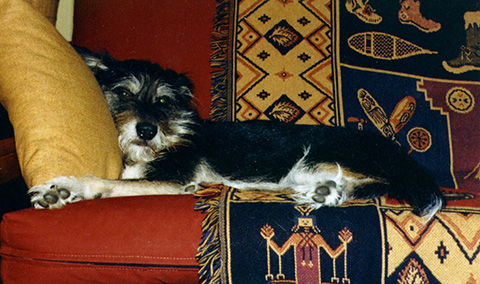 A Tale of Two Fuzzos

People often ask where the name "Fuzzo" comes from -- some who have seen me with my mane of slowly graying hair think the name applies to me. It doesn't. The original Fuzzo was the late, great Curly (above), who died several years ago and who is still sorely missed.

Curly wasn't the only fuzzo in the world. Check out The Astonishing Fuzzo!

For more information, go to my CLIMate-VEGetation modelsl for WINdows page.

I Ching for Windows

I Ching for Windows is a program I wrote for myself to cast I Ching hexagrams. The hexagrams contained can be used for the purposes of either divination or (in my case) mediation.

Hexagram and trigram descriptions are based on Richard Wilhelm's The I Ching: Or Book of Changes (translated by Cary F. Baynes and published by Princeton Universitiy Press).

For more information, go to my I Ching for Windows page.

Many researchers could benefit from the use of Global Historical Climatology Network (GHCN) data. But one of the problems they face with the data (other than downloading and uncompressing/unzipping those monster-size data files) is extracting data from the stations/regions they need.

There is some extraction code available on the GHCN download sites, but it isn't user friendly nor is it completely functional. Therefore I have reworked an extraction program I developed while at the Tree-Ring Laboratory at Lamont-Doherty Earth Observatory.

The original versions of ClimExWin were written in Fortran, but this new version—a full-featured Windows version—is written in Free Pascal using the Lazarus Integrated Development Environment. It represents a complete overhaul of the original code. In addition, the additional help documentation was upgraded to the new Windows HTML Help format.

Check Out My LibraryThing Catalog